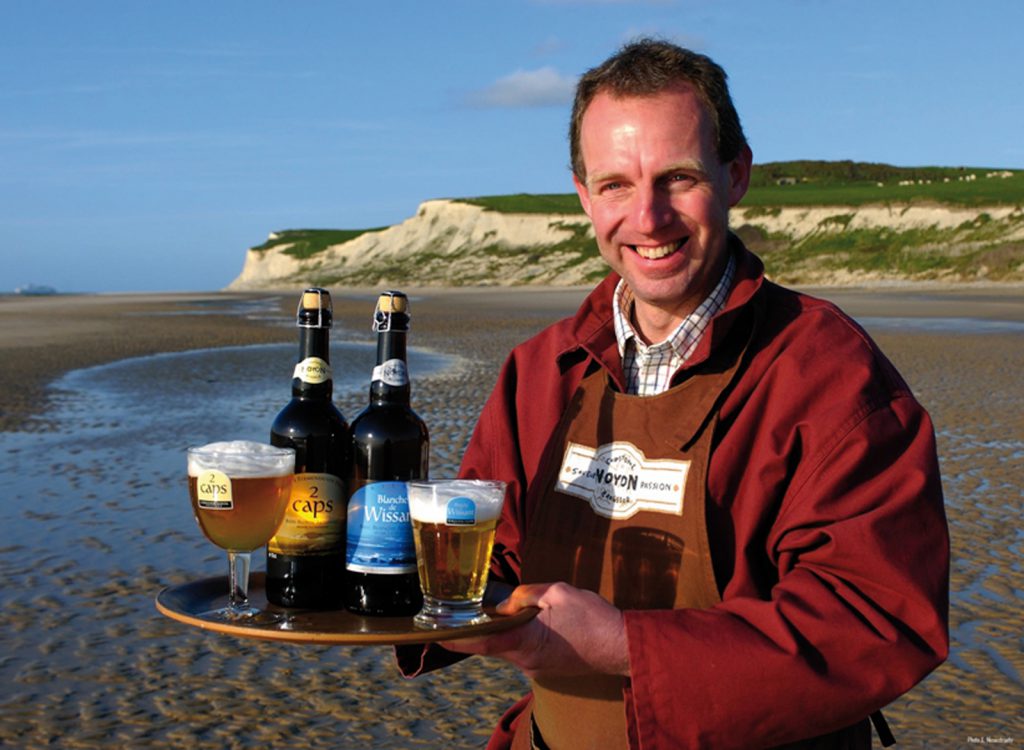 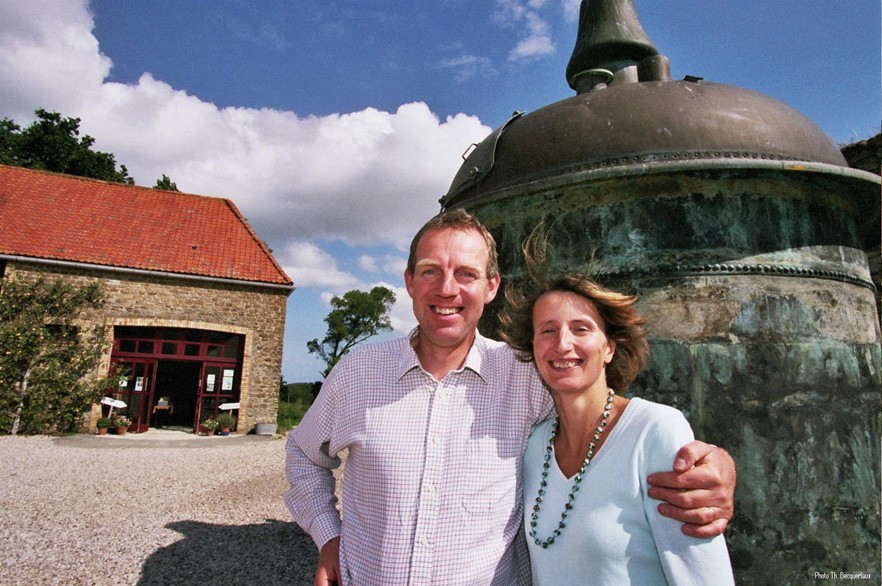 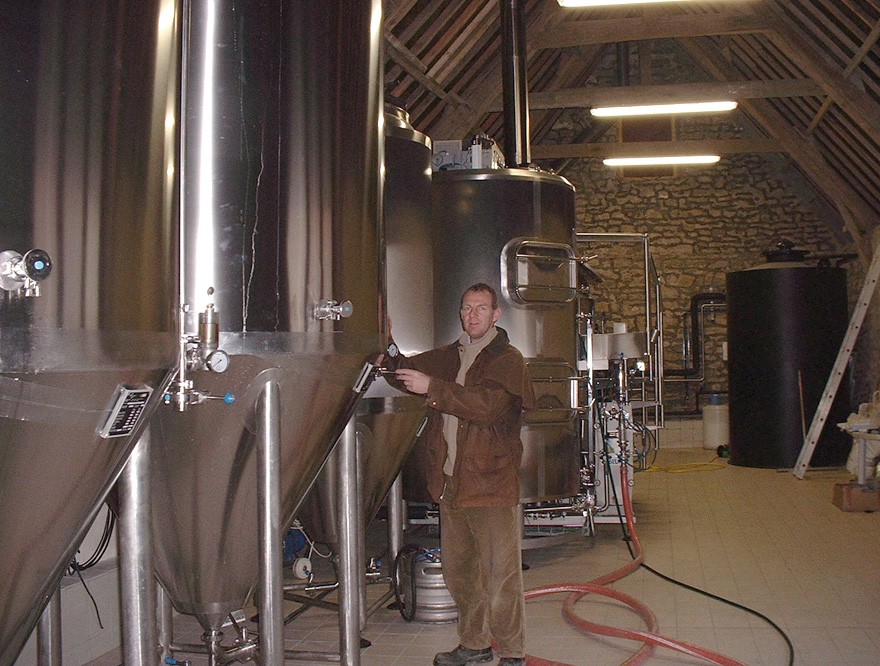 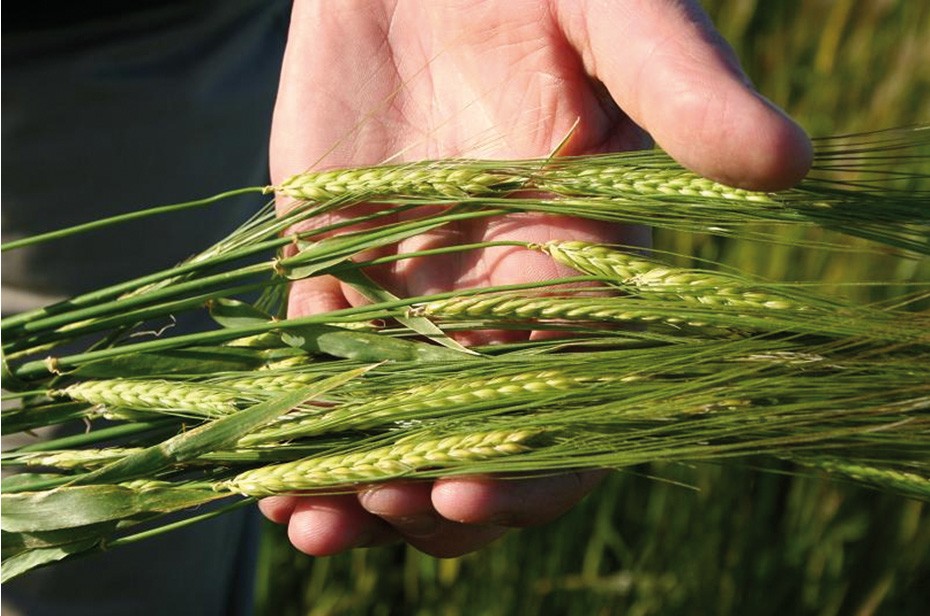 Born at the Belle Dalle farm and being a countryman at heart, I always knew I would come back to my roots. I studied to be an agricultural engineer (ISA Lille), then I became an amateur brewer.

After 13 years experience with “Dupont de Nemours”, I chose to leave my job to fulfil a dream: create a craft brewery on the Cote d’Opale and go home to the family farm. My wife, graduated from a National School of Commerce (ESSCA Angers), after having done humanitarian work both in France and abroad, she then worked a year as a headmistress of the French state education system before deciding to take leave of absence in order to carry this project with me.

We have three young children and we therefore thought that it was essential not to attempt to do too many things at once and to combine our skills whilst preserving a stable life style for the family. So, at the age of 37, I became a student once more to do a 3rd year degree course in brewing at Louvain La Neuve in Belgium, a course which I completed with two placements in small Belgium breweries.

In March 2003, Christophe Noyon Brasseur Ltd came into being thanks to our savings and the help of several partners from different associations and institutions. In Spring 2003, we launched our first beer, the 2 CAPS, a light ale following in the wake of traditional monastery brewed beers.

Finally, in Spring 2004, the “Blanche de Wissant”, a refreshing and tasteful wheat beer appeared on the tables. At the beginning of 2004, I also took over the family farm with the long term project of covering the whole process from the field to the end product.

PARIS WASN’T BUILT IN A DAY

For such a project to be viable and autonomous in the long run on the market focusing equally on the pre- as well as on the post production process (industrial malt processors, big breweries, hypermarkets, brewing contracts…), it is needed to be shaped progressively. We therefore began by the perfecting and commercialising our first beers before brewing on site.

Every weekend, we welcomed visitors who had heard about our project and who could then buy our beers directly from the farm. Our beers are also distributed to an increasing number of cafés, hotels, restaurants, delicatessens, and wine merchants, small and medium sized supermarkets in the region, allowing us to surpass our goals and to reach 1100 HL of sales in 2005.

Reassured by the success met by our first beers, we decided to take on our first employee in 2004 and restored a barn to install the brewing room, the fermentation tank and the bottling line in December 2005.

2006 marked a major stage in the expansion of our enterprise. For once the equipment was set up we launched our first beer brewed on site at the beginning of June. We called it the “Noire de Slack”, a brown ale beer with roasted aromas… A beer rewarded by a Silver medal at the Agricultural show in 2007.

Step by step, we began to brew all of our recipes on site keeping in mind the key values of our enterprise: autonomy and quality. In July 2006, we took on a new employee in order to meet the growing needs of business, and in August we took on a young apprentice.

FROM THE FIELD TO THE GLASS: THE “BELLE DALLE”

In the brewery world, there is little understanding of the land. Indeed, between the farmer who cultivates the barley for brewing, (principal ingredient for beer) and the brewer: the barley grains are converted into malt barley, this intermediary process is carried out by malt processors.

As farmers and brewers, cultivating reputably very good barley for brewing, one of our initial desires at the very beginning of our project was to revive the notion of a brewing farm and to use our own barley. In order to do so, we had to find a malt producer who was interested in producing a few dozen tons whereas most malt producer’s silos are generally made for a several hundred tons of malt…

This goal has now been achieved and the fields of barley harvested during the summer of 2006 on the farm have been malted properly with a guaranteed 100% traceability (HACCP), and then recently brewed for the first time. We will soon launch the “BELLE DALLE” inspired by the name of the family farm. The “BELLE DALLE” will be a light ale of about 8°alc./vol., brewed with barley harvested on the farm.

SHARE OUR PASSION, BEER: A CONVIVIAL DRINK WITH MULTIPLE FLAVOURS AND CULINARY INGREDIANTS TO BE DISCOVERED

In France, the beer sector has become strongly industrialised and the taste and variety of craft beers have lost. Over the last few years some small, new breweries are offering diverse and tasty craft beers. Our business is part of this movement and in the coming years our desire is to develop a complete tour for tourist encompassing the notion of “from the field to the end product” and to invent new recipes for quality original beers.

In our opinion, it is more important to enhance, innovate, explain, collaborate and gain a local foothold for our beer than to seek to expand. Beer which is an ancestral, complex and diverse drink has currently been rediscovered. As with wine, each type of beer: light ale, triple, wheat beer, ale, dark ale or stout, can be drunk on different social occasions: aperitifs, tasting, with a meal. In cooking, it can be used for family recipes but it is also an ingredient to be discovered in the field of gastronomy…